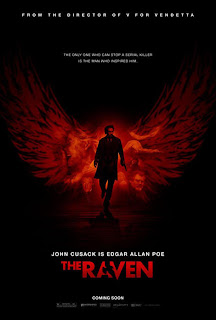 A new poster for the forthcoming film The Raven which is based around the author Edgar Allan Poe. John Cusack who plays Poe becomes entangled in the search for a serial killer who is using the more gruesome pieces of his work as motivation. The new poster is definitely eye-catching, the blood-red wings creating a real sense of menace. The Raven is due to be released in the UK on 9 March 2012.
Date for your diary! The successful Crime in the Court that first took place last year in July and organised by David Headley of Goldsboro Books will once again take place this year. The date is 5 July and is to coincide with Independent Booksellers Week. Watch this space for further information.

Calling all budding US based writers! Poisoned Pen Press have announced the first annual Discover Mystery Award, a first book contest for unpublished writers trying to break into the mystery genre. This spring, join them by entering your mystery manuscript of 60,000-90,000 words in an effort to win a $1000 prize, the Discover Mystery title, and a publishing contract from Poisoned Pen Press.
At Poisoned Pen Press, they take their mission to “Discover Mystery” very seriously. They have always prided themselves on the discovery of new writers, and now they are on the hunt for fresh voices and new stories. They are not afraid of something different, either, so if you’ve got a mystery, they want to see it! Poisoned Pen Press is waiting to discover you!

Here’s what to do:
Visit www.poisonedpenpress.com/contest

Read the guidelines carefully and fill out the form on our website, pay the $20 entry fee, and attach your manuscript. All entries are due by 11:59 pm (Pacific), April 30th, 2012. A winner will be announced by May 31st, 2012. Entries will be judged based on their synopses and manuscript text, with the assistance of celebrity judge, Dana Stabenow!

Entry Requirements and Guidelines:
· Unfortunately, we will not be able to help you decide if your book is a good fit for our contest. If you have questions about the kinds of books we publish, please visit www.poisonedpenpress.com.
· Due to the number of entries, Poisoned Pen Press will not be able to answer questions regarding your contest entry.
· This is a first-book award. It is open to writers who have not published a full-length book in the mystery genre.
· Manuscripts previously submitted to Poisoned Pen Press are eligible for entry in Discover Mystery, provided that those manuscripts have undergone major revisions.
· Manuscripts previously published in print or digitally, including self-published, are not eligible.
· Manuscripts must be between 60,000 words and 90,000 words in length.
· The Poisoned Pen Press Discover Mystery Award is open to all authors writing original works in English for adult readers who reside in the United States .
· Non-fiction of any kind, including autobiography is not appropriate for this contest.
· To avoid conflict of interest and to avoid the appearance of a conflict of interest, friends and former students of a judge or a Poisoned Pen Press employee are ineligible to enter the competition for that year.
· Poisoned Pen Press makes every effort to vary the judges by region and aesthetics, so that writers, if ineligible one year, will certainly be eligible in future years.
· You may not submit your manuscript to other publishers while it is under consideration by Poisoned Pen Press.
· Poisoned Pen Press cannot consider manuscript revisions during the course of the contest. Winning authors will have an opportunity to revise their works in collaboration with our editorial staff before publication.
· Should no entry meet editorial approval, Poisoned Pen Press reserves the right NOT to declare a winner.
· Failure to pay the entry fee will exclude you from the contest.
Write. Win. Publish.
www.poisonedpenpress.com/contest

The third series of Whitechapel starts tonight at 9pm on ITV. The storyline for tonight’s episode is based around four people being butcher at a fortified tailor’s workshop in the East End. Soon everyone in the area are obsessed with horror and panic at this seemingly impossible and grisly murder.

The Girl with the Dragon Tattoo will not be shown in India after all. India’s Central Board of Certification asked for five scenes to be cut which the director David Fincher refused to do. The film was due to be released on 10 February. The full article in the Guardian can be read here. The Telegraph’s take on it can be read here.

A very interesting interview with Philip Kerr is in the Telegraph. Certainly worth reading for an insight as to how he started to write the Bernie Gunther novels.

As interviews go, a brilliant one in the Chicago Sun-Times with Walter Mosley who talks about the reaction he received when announced that his Easy Rawlins series was likely to end. Needless to say a lot of people were not happy with the news.

Not sure how I missed this but Hugh Bonneville of Downton Abbey fame has signed on according to Daily Screen to play the lead role in the feature version of Peter James’s Dead Simple.

Rather sadly it appears that the US are planning a remake of Spiral the French police procedural drama. According to the Guardian it will be transferred to the streets of Philadelphia and is being developed by Sam Mendes. It will be interesting to see how this turns out, as the original series that was shown on BBC 4 was a hit.