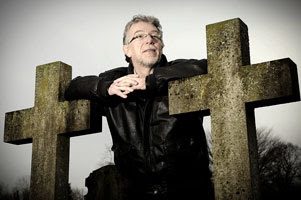 Today’s guest blogger is Jim Kelly. Jim is the author of the Philip Dryden series which is set in Ely in the Fens. His latest series features Detective Inspector Peter Shaw, is based on the North Norfolk coast and in the port of Lynn. In 2006 he won the CWA Dagger in the Library.

I rarely get the thrill of actually committing a crime. I’m reminded of an exception to this by an item of stolen goods, which sits on my desk. I thought I’d tell you all about this on the basis that I appear – according to legal advice - to be protected by the Statute of Limitations, and by the fact that the object itself is of a value which is unlikely to inspire the interest of barristers. So look upon this as a confession. This is just between you and me.

It’s a key and key fob. For those of you who like detail – and hey, we’re all crime geeks, so that’s all of us – the key was made by PAPAIZ of Brazil. (For those of you with busy lives, that’s a red herring) But it’s the fob that I was after. It is black Bakelite, that kind of brittle heavy plastic that is so resonant of the post-War era in which I grew up. (We had a Bakelite phone at home, which so rang so infrequently that we all jumped when it did. My mother would instantly cover her mouth with both hands on the basis that if it was ringing there must have been a death in the family). Anyway, the point is the black fob carries a single name in stencil: CHRISTIE.

The scene of my crime is Burgh Island off the south Devon coast. The time is 1997 – five years before the publication of my first novel, The Water Clock. I was forty years old and my wife had booked a room at the island’s art deco hotel. It’s a strange place – a tidal island, reached by a causeway at low water and for several hours on either side of low tide by a peculiar sea tractor – a kind of box-car on stilts, which drives out into the water. It’s all very exciting, so much so I had to repair to the Pilchard Inn – the island’s only other building – for several pints to get over the ordeal.

It was here, sitting outside watching the tide finally close off the island from the distant beach that we learnt that this was a very famous island if you are a student of crime writing. In 1939 Agatha Christie published And Then There Were None, a whodunnit not only conceived on the island but set on it – albeit half-heartedly disguised. (The original title was the reprehensible Ten Little Niggers) It sold for 7/6 and has – to date – shifted 100m copies, making it one of the best selling books of all time. The plot is one of adamantine beauty: eight people who have previously committed crimes for which they were not punished are summoned to the island. Their hosts, they are then told, are away, but they will be looked after by two servants. Each of the ten dies – in a fashion mirroring the original nursery rhyme now known as Ten Little Soldiers, until there are none left. The police arrive to find the ten bodies. Who dunnit – who could possibly have done it ? The last death – by the way – is clearly not suicide.

I was taken by this story. I loved the notion of the island as a ‘locked room’, and the notion of the ‘impossible crime’ – the two central pillars of what became known – perhaps unfortunately given the board-game rigidity of the premise – as the Golden Age of British crime fiction. But Christie could plot like no other. So imagine my delight on discovering that we had been allocated the Christie suite ! The very room in which she had devised her masterpiece. On leaving I contrived to discover the key fob in my luggage as the sea tractor groaned its way through the water towards the mainland. I seem to recall my wife making me promise to return it by post. Whoops. 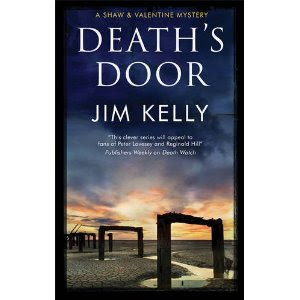 CUT to the early winter of 2009. Fearlessly I have decided to do some research so that I can write a new Shaw and Valentine mystery based on an island. Norfolk is not a very helpful county in this regard – there are only a few sandy islets on its endlessly smooth, littoral coast. I have a ruck-sack, a map, and am wearing a wet suit. (A half one – for summer – but I still look like a tadpole.) The beach is at Wells, a mile from the town, a glorious sweep of sand and dunes looked over by the most complete terrace of beach huts in Britain. Across the sands wanders the channel which links the North Sea to Wells harbour. It is deep and treacherous. On the far side of this channel – so dangerous that in summer a wartime siren wails an hour before the tide turns – lies my destination – the islet of East Hills, a thin spine of sand, topped with pines, surrounded by reed marsh.

The only problem is I have to walk there, a prospect not lightened by the knowledge that I am a very poor swimmer. Even at low tide this involves wading through several feet of fast-running current across a fifty yard channel to ribbed sea-sand, then picking a way to the island itself, about a mile distant. I have used tide tables to compute the exact moment when it is best to cross. I pick my spot and begin to wade out, the water quickly rising to my chest, so that I have to hold the rucksack over my head. The water is icy. I have an audience of bemused walkers, and up in the dunes, I sense the eyes of the coastguards in their hut, and the crew of the full-time lifeboat in their second-floor rest-room – which boasts a picture window giving a perfect view of my impending death. Because I’m more scared of looking like a coward than death itself I wade on. I’m now in big trouble. My bones ache with cold, the water is so deep I am now bouyant and my toes are clinging to the sand, and the rucksack is soaking wet. I drift off for a few seconds (seawards – because the wind and tides are still pushing water out of Wells harbour) By pure chance I am deposited on a thin sand bar. My feet grip the sand in a prehensile miracle and I waver there, a inch from being taken out into the North Sea. My heart crashing around in my rib-cage like a fairground dodgem I begin to edge back to dry land.

Defeated, I still don’t want to give up. I yearn to sit on East Hills and think through the plot of the new book I’m planning. So I take advice: wandering up to the Coastguard Hut I ask them if it is safe to cross the channel. (This is typical isn’t it? As if being told by someone in authority it is the right time will in some way make me three foot taller.) They consult various tables and tell me it is the right moment – and exactly where I have just failed to cross. (Let this be a lesson to us all. Never trust someone who has to consult a table). I then go to the lifeboat house. I’m invited up to the restroom with its view north towards the unseen pole. The sea looks Arctic blue from here, and I guess they think I’m an idiot. I ask them the same question. Two crewmen think about an answer. They don’t consult a table, they walk to the window and look at the sea. Give it an hour is their advice. The wind is from the north and it’s bottled up the tide in the vast expanse of Wells harbour, so the water is running out late. And if I want to wade then do it right in front of the lifeboat house – not up the channel where I tried.

An hour later I’m sitting on East Hills. The trip was hair-raising and I’m really not looking forward to going back, but at least I’m here. It’s spooky. In the lee of the island – the seaward side – there’s a kind of petrified forest, and an old pillbox, and evidence of camp fires but no sight of anyone. There’s a solitary trainer hanging from its laces in a stone pine. I find myself looking behind me along the sandy paths as I explore. I sit down with flask, sandwiches, and binoculars and think about my plot: will it work?

The premise is simple – if not as rigid or puzzle-like as Christie’s. A summer boat trip takes 76 people out to East Hills in 1994: tickets are sold, so we know the numbers. The boat returns six hours later to pick up the trippers. As it approaches the floating dock there is a scream – a woman, wading out to swim, encounters the body of a young man, shrouded in a cloud of blood. He dies on the sand from a knife wound. The police evacuate the remaining 75 people from the island. The crime is unsolved. A blood soaked towel is recovered from the island – discovered in the pine woods behind the beach. Forensic analysis confirms two blood types – one of which is the victim’s. But it is not possible to extract a DNA sample given the rudimentary state of the science at that time.

CUT forward to now. West Norfolk police have decided to spend a Home Office grant on re-opening the case. A DNA trace is extracted from the towel which does not match the victim and is from a man. Thirty of the 66 people evacuated from East Hills are still alive and are men. They have been summoned to King’s Lynn police headquarters for a DNA test. Five of the eight who have died are male, and the recovered DNA – Sample X – will be compared to familial samples from their relatives. Given that 76 went out, and 75 came back – plus the body of the victim – the DNA sweep will give them the identity of the killer.

Except that now I sit here on the sand it is clear it might not. The killer could have waded over, or swum, and then got away. So I walk to the northern point of East Hills and look out to sea. I need to create my own island – just like East Hills but a few miles off the coast, isolated by a lethal rip-tide, and inaccessible. It’s a fateful decision because it marks the real beginning of the story of Death’s Door – the moment when I left reality behind and started to build the fiction. I’ve just paused for a moment in writing this BLOG to go downstairs and answer the front door. It’s the postman with a box of copies of the new book – the first time I’ve seen or held it. It’s handsome. I put one copy up on the shelf, and put my CHRISTIE key fob on top.

One of my favourite authors, have read all the previous books twice and I'm really looking forward to reading this one. Flighty

I didn't know about the Dryden series and I'm super excited. I got engaged in Ely! Off to order some new books!