The Lewis Man returns to Stornoway 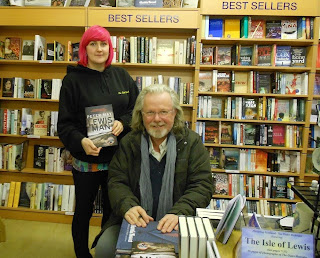 Bestselling author Peter May was in London earlier this month for the publication launch of the second book in his Lewis Trilogy “The Lewis Man”. The write up for that event can be found on the Shotsblog. As most readers will be aware, The Lewis Trilogy is set in Stornoway. With very little persuasion and with extremely grateful thanks Peter agreed to do a guest blog for us about his return to Stornoway for the launch of The Lewis Man.

Just ten days ago I landed, in the aftermath of a storm, on the Isle of Lewis, the setting for my Lewis Trilogy of crime novels, to launch the second book in the series, “The Lewis Man”.

It was more than two decades since I had first set foot on this remote island in the Outer Hebrides of Scotland. Then I had gone to assess the potential for making a TV drama serial in the Gaelic language and filming it all on the island.

It had been a shock to the system. A bleak, treeless landscape, ravaged by gale force winds that arrived uninterrupted across 3000 miles of Atlantic Ocean. A place where people heated their homes by burning peat turfs dug from the bog. Where the Sabbath was inviolate. Everything closed - shops, restaurants, filling stations. No ferries, no planes, no Sunday papers. Children’s swings chained up. Public toilets locked.

Houses stood huddled together against the elements, villages strung along cliffs of black, obdurate gneiss rising sheer out of an angry sea. A sky as big as you will ever see, that changed every few minutes. From rain to sun, from sleet to rainbows, from the obscurity of low, impenetrable cloud, to stunning vistas opening out towards the mountains of the south.

I spent most of the next five years living on the island, filming in all weathers, producing a subtitled TV drama called “Machair”. It became the surprise hit of the nineties in Scotland. Shooting into the top ten, it grabbed a 33 percent audience share, when soaps like “Brookside” could only manage 16. A vibrant cast of talented young Gaelic speakers became household names.

But I was restless and wanted to pursue my first love - writing books. And so I quit the world of television in ’96 and embarked on the writing of my China Thrillers series. I could never have foreseen then that ten years later I would be back on the island researching the first book in what would become my Lewis Trilogy.

“The Blackhouse” was a departure for me from the world of thriller writing, a venture into what the French would call the roman noir - literally, the black novel. While the basis of the story was predicated upon a crime, the book itself owed more to the tradition of the novel. Which is why, perhaps, it was initially rejected by every crime editor in the UK.

It took my French publisher to spot its potential, and it was first published there in translation before being bought up around Europe - and finally by British publisher, Quercus. The rest is history. The book became a huge success in 2011, picked by Richard & Judy for their autumn selection, climbing into the top ten and selling more than 130,000 copies.

Persuaded to turn it into a trilogy, the second book in this mini-series, “The Lewis Man”, finally hit the UK bookshelves this month. Yes, I had returned to the island to research it, and yes, I had gone back again last year to research the third and final book. But what I didn’t know was how they would be received by the people of the island themselves.

I’d had an inkling from the emails and tweets and Facebook posts about “The Blackhouse” which had been sent to me by island residents and exiles alike. Despite my status as an “outsider”, islanders seemed to be embracing the book as an accurate reflection of their culture and way of life. In a strange way, it was almost a validation of their place in the dominant English-language culture of the British Isles. It is only too easy to feel marginalised when you live on the fringes of society, and in this case the furthest north and west you can go in Europe. Suddenly the Isle of Lewis was on the map, and the rest of the country was sitting up and taking notice.

When I received an email from the leader of the guga hunters - the group of men whose annual pilgrimage to a storm-lashed rock in the Atlantic to slaughter 2000 young ganners had provided the basis for the story of the book - I was almost afraid to open it. After all, I had penetrated the inner circle of this 400 year-old tradition, and exposed it to the world in a bloody and dramatic fiction. To my great relief, he told me that the book had been read by all the hunters - and they loved it.

But I had still to face the islanders myself. And so when a mini-tour of the UK was being planned to launch “The Lewis Man”, I suggested that we do an event in Stornoway, which is the only major town on the Isle of Lewis, and home to the Hebridean fishing fleet. 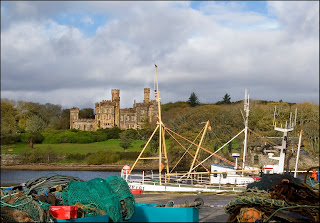 And so this month I found myself returning once more to the island, almost twenty-one years to the day that I had first sailed to it on a ferry from the Isle of Skye. This time I flew in with Quercus Key Account Director, Ron Beard, on a flight from Edinburgh.

We were both concerned. Flights to Lewis at any time of year can be subject to strong winds, but mid-January is never an ideal time to make the trip - and storm force winds were being forecast. In the event, it wasn’t too bad. Wind shear rocked the small aircraft as we flew in during the darkest hour just before dawn, but we landed safely and made the thirty-meter dash from the plane to the tiny terminal building with the wind and rain stinging our faces.

Safely inside we were met by the representative of an island car hire firm who was waiting for us with our rental car. The event wasn’t until 7.30 in the evening, and we had a whole day to kill. So since this was Ron’s first trip to the island, I took him on a drive across the desolate wilderness that is the Barvas moor to where the Atlantic was venting its fury all along the west coast.

We stopped at an old disused church, which had been bought and converted to a home by my old designer from “Machair”, David Wilson*. The island had got into his blood to the extent that he had decided to set up home there in his retirement. David, who now spends his time taking the most wonderful photographs of the Hebrides, had applied his artistic talent to the conversion of the building, creating a huge and spectacular room up amongst the rafters where once the voices of the faithful had been raised in Gaelic psalm-singing.

We drank coffee and talked about old times, and browsed through some of his spectacular photographs, before braving the elements once more and heading north.

Sunshine and sleet took turns to sweep across the peat bogs as we arrived, finally, at the most northerly harbour on the island, Port of Ness. It was there, in an old boatshed, that the murder victim in “The Blackhouse” was found. We followed the cliff road that winds up above the beach there, through the community that forms the basis of the book’s fictitious village of Crobost, to the tiny harbour at Skigersta, and the derelict house, which I had used as the model for the home where the book’s hero, Fin, had grown up following the death of his parents.

Sunlight washed across the landscape then, almost as if to say to Ron “see, I can smile too.”

We headed back to Stornoway. The wonderful seafood brought in to its harbour by the fishing fleet is processed there and sent off to markets around the world, leaving almost none of it for the locals. So we ate in an Indian restaurant! What could be more Hebridean than onion bhaji and chicken tikka? And there wasn’t a prawn in sight.

After lunch, we visited the only bookstore in town, the Baltic Book Shop. They had a huge display of “The Lewis Man” strategically placed just inside the door, and the owner told us that “The Blackhouse” was the best selling fiction on the island. She anticipated that “The Lewis Man” would follow in its footsteps. I signed all their stock, and we headed off for an interview with Iain X Maciver for the local radio station, Isles FM. That was followed by a telephone interview with the Sunday Post, a popular Scottish Sunday tabloid, and then we set off to visit the venue for that evening’s event. 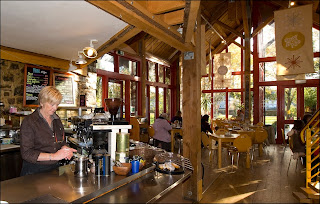 The Woodlands Centre is a beautiful new building of wood and glass set amongst the trees in the grounds of Lews Castle, a mock-Tudor edifice built in the nineteenth century by the island’s then owner, Sir James Matheson. The castle looks out over the town and the inner harbour, and the hill that it sits upon provides shelter for the only mature trees on the island. The Woodlands Centre is a café/restaurant/art gallery run by a delightful lady, Maggie Mackenzie, who used to be one of the stars of my Gaelic drama serial. She discussed how the venue would be laid out for the event, and how she had arranged the installation of a public address system so that everyone could hear me. A full-page article about me in the Stornoway Gazette the previous week would, she was certain, provide the impetus for a good turn-out.

In the event, none of us was prepared for the crowds that poured into the Woodlands Centre that evening. More than a hundred people turned up on a bitterly cold night, and it was standing room only. I spoke for about forty-five minutes, and signed books for the next hour, working my way slowly through the long queue that wound its way through the centre. By the time I reached the end of it, we had sold out of the books which Quercus had had specially shipped to the island.

Three days and seven hundred miles away from the launch of the book in a London hotel, and twenty-one years after my first Hebridean footfall, I finally had the verdict of the islanders on my books. And it was a big thumbs up!

*Hebridean Light by David Wilson is a book of photographs of the Hebrides, which provides a good glimpse of photos of the island
Posted by Ayo Onatade at 11:03

I have enjoyed the Lewis Trilogy so much and been inspired to try to find out more about the location. The only thing is I am so ignorant of the Gaelic and wished I could pronounce the Gaelic words and names in the books, I wonder if Peter May could include an appendix showing pronunciation?
Thank you so much for a great read,
A Londoner