The Lewis Man comes to London 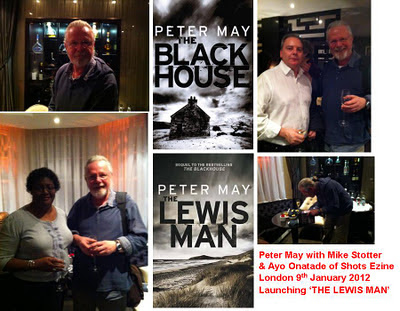 Quercus Publishing are rather busy currently, with the David Fincher version of THE GIRL WITH THE DRAGON TATTOO on world-wide release currently. The Publicity Team of Lucy and Nicci have barely time to breathe, now with the second of Peter May’s Scottish Trilogy hitting the Bookstores this week THE LEWIS MAN.

The Shots Team of Mike Stotter, Ayo Onatade and I were delighted to join Peter May last night in North London for the launch of this hypnotic thriller. The Quercus team had invited many of the London Critics to meet Peter over wine and canapés, including Laura Wilson of the Guardian, Chris Simmons of Crimesquad, Jake Kerridge of The Telegraph, John Dugdale of The Guardian and The Sunday Times, and many others.

Shots have been impressed by Peter May’s new series as the review from our man Calum MacLeod indicated, when reviewing The Black House –

If our crime writers are to be believed our apparently placid Scottish islands are hot beds of crime. Ann Cleeves has won the Crime Writers Association Gold Dagger for her tales of murder in Shetland and Louise Welsh has delved into mystery and intrigue on little Lismore.Now Peter May has turned to Lewis, though with a murder rate currently running at one a century, as the author notes, it is hardly seems likely to offer fertile ground for a crime series, even if it is first of a planned trilogy.However, May knows his Lewis. Though he comes to the setting as an outsider, he spent six years on the island working on STV’s Gaelic language soap "Machair", obviously filing away the details of island life.

These feeds into a story which, remarkably in 21st century Britain, could not have worked anywhere else, from the stark Calvinism which ensures the island Sabbath remains very much the Lord’s Day, to the annual guga hunt of baby gannets conducted by the men of Ness on an inhospitable islet, recently the subject of a BBC2 documentary, which provides the meaty climax to the tale.

Read the Full Review of THE BLACK HOUSE here

And Crime Writer Jim Kelly’s verdict on THE LEWIS MAN, the second in the planned trilogy is equally enthusiastic –

May is very clever here, writing from inside Tormod’s head, because he limits his diction and pallete, so that he tells a brilliant story but with the sparest of language, so that the old man’s inner voice sounds genuine. He’s also managed to inveigle a more conventional crime novel into the package as well – and that provides us with a satisfying climax spiked with genuine fear, as violence – Glasgow-style – tracks Fin and Tormod down to their clifftop hamlet. The book’s a delight: bringing people and place alive in equal measure.

Read the Full Review of THE LEWIS MAN here

And if those snippets haven’t got you reaching for these two remarkable books, then this atmospheric video should chill you into grabbing copies -

Peter May is a member of International Thriller Writers and an accomplished and prolific novelist, as well as spending much time in the TV industry.

Peter’s breakthrough came with THE BLACK HOUSE, the first in his ‘Lewis Trilogy’, which became a Richard and Judy Selection, but wait till your read THE LEWIS MAN, but ensure you have a free evening, because once the spine’s cracked, you will be captured by this wintery tale.