UK Launch of The Boy In The Suitcase At Foyles 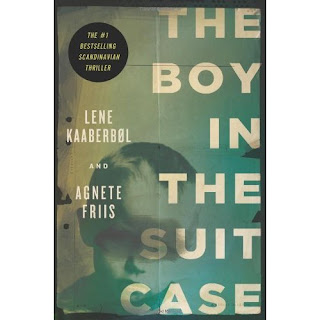 The Boy in the Suitcase (Drengen i kufferten) by Lene Kaaberbøl and Agnette Friis is being launched at Foyles, on 17th January at The Gallery, Foyles, Charing Cross Road, London, WC2H 0EB; TIME: 6.30pm to 8.00pm

Celebrate with the authors the English language release of the award-winning Danish thriller The Boy in the Suitcase. The evening will feature a lively discussion with the authors chaired by crime fiction expert Barry Forshaw, author of Death in a Cold Climate: A Guide to Scandinavian Crime Fiction and editor of Crime Time. It will include compelling insights from Scandinavian Crime enthusiast and founder of the legendary Nordic Noir Book Club Dr. Jakob Stougaard-Nielsen (UCL).

Lene Kaaberbøl has sold more than two million books worldwide as a fantasy writer. Her collaborator, Agnete Friis, is a children's writer. The bestselling Nina Borg series has been translated into nine languages and was a finalist for the coveted Scandinavian Glass Key Crime Fiction Award in 2009. It received the 2008 Harald Mogensen award for best crime novel.
Nina Borg, a Red Cross nurse, wife, and mother of two, is a compulsive do-gooder who can't say no when someone asks for help—even when she knows better. When her estranged friend Karin leaves her a key to a public locker in the Copenhagen train station, Nina gets suckered into her most dangerous project yet. Inside the locker is a suitcase, and inside the suitcase is a three-year-old boy: naked and drugged, but alive.
Is the boy a victim of child trafficking? Can he be turned over to authorities, or will they only return him to whoever sold him? When Karin is discovered brutally murdered, Nina realizes that her life and the boy's are in jeopardy, too. In an increasingly desperate trek across Denmark, Nina tries to figure out who the boy is, where he belongs, and who exactly is trying to hunt him down.
Posted by Ayo Onatade at 12:39