The winner of the 2021 Petrona Award for the Best Scandinavian Crime Novel of the Year is:

TO COOK A BEAR by Mikael Niemi, translated from the Swedish by Deborah Bragan-Turner and published by MacLehose Press.

As well as a trophy, Mikael Niemi receives a pass to and a guaranteed panel at CrimeFest 2022. Mikael Niemi and Deborah Bragan-Turner will also receive a cash prize.

The judges’ statement on TO COOK A BEAR:

The judges adored TO COOK A BEAR, a historical crime novel set in northernmost Sweden in 1852, and were unanimous in our decision to select it as the Petrona Award winner for 2021. We were particularly impressed with the novel’s use of historical detail, its fascinating reimagining of a figure from history, the sense of location and atmosphere, the rumination on religion versus the natural world, and the depiction of early forensics. TO COOK A BEAR’s superb characterisation of the main protagonists Læstadius and Jussi, which is tinged with sadness yet hope, also allows the author to explore the issues of literacy and class with sensitivity and compassion. The beautiful translation by Deborah Bragan-Turner lets the novel shine for English-language readers around the world. 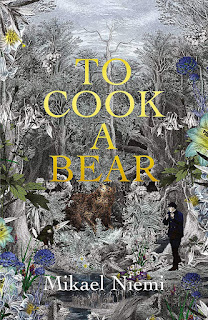 TO COOK A BEAR is the first historical crime novel to win the Petrona Award.

Comments from the winning author, translator and publisher:

I am very proud and happy to have received the Petrona Award and would like to thank my editor, Katharina Bielenberg, my translator Deborah Bragan-Turner, and my agency, Hedlund Literary Agency, who have made it possible for this novel to reach British readers. This happy news has brightened the growing winter darkness here in the very north of Scandinavia. I am sending my warmest thanks to all my British readers.

I am absolutely thrilled and very honoured to receive the Petrona Award. It’s a great privilege to be in the company of such accomplished authors and translators on the shortlist. Many congratulations to you all. Thank you to MacLehose Press for your support and editorial advice, and to the panel of judges for your championing of and enthusiasm for Scandinavian fiction in translation. And of course thank you most of all, Mikael Niemi, for bringing the story of Jussi and the pastor to us in TO COOK A BEAR, an inspired novel and a joy to translate.

MacLehose Press: "We are delighted that Mikael Niemi’s novel has been recognised with the Petrona Award. TO COOK A BEAR is immersive and transporting, historical crime fiction at its best, and it has been thrilling to watch it find its readers in English. Powerfully vivid and lush in its descriptions of Sweden’s very far north, and brilliant on literacy and the power of language, it has been beautifully and imaginatively rendered in Deborah Bragan-Turner’s translation. Congratulations to them both!"

The Petrona team would like to thank our sponsor, David Hicks, for his generous and continued support of the 2021 Petrona Award.