Hey! My Characters Have Hijacked my Book! by Joy Ellis 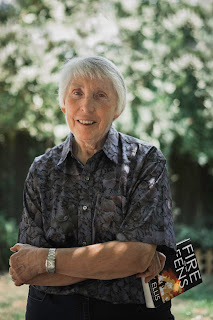 And I thought I was in charge... after all, they are only fictional people, creations born in my mind, and given life only in the pages of a book. Of course I should have known this wasn’t quite the case, when I woke one morning to hear a voice in my head saying, ‘I’m DI Nikki Galena, and it’s about time you got your arse into gear and wrote my story!’ Her words, not mine!

I grabbed my notebook and wrote down the name. Nothing else, just the name. Whatever I was working on at the time was put on the back burner, because Nikki had arrived, fully formed; an angry detective inspector, with one heck of a backstory. That was the beginning of the Fen Series. Book One, Crime on the Fens, and at the time I had no clue that nine years later, I would be writing Book Thirteen, and Nikki would still be digging me in the ribs, and telling me to type faster as she had a whole lot more to say.

This particular protagonist caused me to look at characters in general in a very different way. I also started to realise that no matter how carefully you described them, your readers ‘saw’ them in a very personal light, and that was often something completely opposite to your own vision of them. I had written several books before, and always tried to paint a clear picture of each character, but when it came to Nikki, I knew that I wanted her to belong the readers, and be whatever they wanted her to be. So I never described her at all. No hair colour, no colour of her eyes, nothing. The strangest thing was, although I knew everything about her; her history, background, childhood, what she liked to eat, things she hated, phobias, what she kept in the glove compartment of her car, and how she would react in any given situation... every single thing I knew was built around her emotions, her reactions and her attitude, but I never once saw her face. Thirteen books down the line, and I still haven’t seen her!

Nikki is an enigma, because I have two other series; the DI Jackman and DS Marie Evans series, and the Matt Ballard books, plus one stand-alone novel, twenty six books in all, and every character has a face, except for Nikki Galena. Just for fun, I asked my Facebook followers to ‘cast’ her, should she ever muscle in on the TV scene, and I received back the biggest eclectic mix of women that you could ever imagine. Out of hundreds of suggestions hardly two were the same. Oddly, if I were asked to cast her myself, again it would not be for her physical appearance, (although she would indeed fit very well), I would choose Rosie Marcel. She is one actor who could pull off Nikki’s personality perfectly. Her portrayal of Jac Naylor in Holby City proves that. I have rarely seen anyone do such a brilliant job of peeling back the layers of a desperately complex character.

And the high-jackers? Nikki is possibly the ring-leader, but when it comes to writing the books, all of my characters have the propensity for de-railing my plans. It seems to go like this... 1) I have an idea. 2) I decide which series it would suit best. 3) I write Chapter One, and set the scene. 4) I introduce the crime and sometimes the antagonist(s). 5) I begin to realise that the direction I was taking is veering slightly, as one or more of my characters are not responding to instruction. 6) I remonstrate, explain my reasoning, cajole, not quite but almost beg that they follow the plan. 7) They refuse, then Nikki, or Joseph, or Matt, or Jackman, or Marie, or the office cleaner, tells me exactly how the investigation should proceed. 8) I give up and let them write the damned story!

There have been times, when at the end of a chapter, I think, where the devil did all that come from? It’s like a carefully planned journey, then up pops one of the characters waving a large Diversion sign, and suddenly you are off-road and heading in a completely different direction.

I know that as an organic writer, or ‘pantser’ as we get affectionately termed, because we do fly by the seat of our pants, we are happy to let the story unfold as we go along. But, just sometimes I’d like it to be my story, not theirs. I can almost see them sitting there smiling smugly, because as usual, when I read it through... they were right! 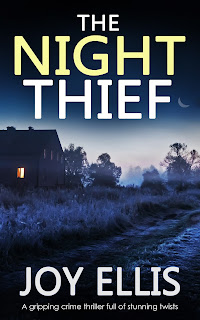 The Night Thief by Joy Ellis (Out Now) Joffe Books

When everyone is sleeping, he comes into their houses. He takes one thing. A photo of their child. A sinister thief on a power trip or something even darker and more sinister? Detectives Jackman and Evans find themselves on the hunt for a highly unusual burglar who seemingly only steals photographs. But then, late one night, an elderly woman falls to her death after seeing someone in her home. Did she really fall, or was she murdered? And just how many mysterious intruders are there on the Fens? With the body count rising, Jackman and Evans have their work cut out for them to track down the night thief - before it’s too late.