The Belgian and the Beekeeper

So there I was sitting on the Sussex Downs, looking down on the giddy seaside resort of Brighton and across at a cremation site for Indian soldiers wounded in the Great War. I imagined that Sherlock Holmes might have retired right here to raise his bees. I was also thinking about the fact that, during World War One, Brighton's Royal Pavilion, a weird 19th century Indo-Chinese confection that Walt Disney would have wished he had created, was converted into a hospital for those soldiers of the Indian army who were wounded on the Western Front. The idea was that they would feel at home there. Yeah, right. 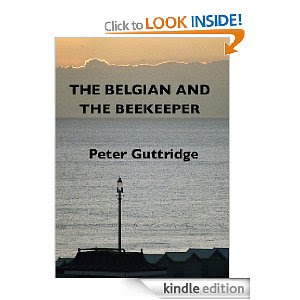 How I came up with the next bit eludes me. I was aware that Agatha Christie's first Hercule Poirot novel, The Mysterious Affair At Styles, was written and set in 1916 (though not published until 1920). That was just two years after Holmes and Watson had foiled a German spy's nefarious plans in His Last Bow. Poirot and Holmes were, for a few years, contemporaries.
Wouldn't it be great if they encountered each other? Well, yes, it would, but when I checked I found only a couple of short stories by the late, great Julian Symons, in which such a meeting had happened. Why had nobody else thought to put those two great, eccentric egos together?
I discovered the main reason, in recent years, was probably copyright. Sherlock Holmes is fair game but Poirot is tenaciously protected by the Agatha Christie Estate. Hmm. I dug a little further and discovered that before Christie created Poirot there had been a fictional French policeman called Jules Poiret. And contemporaneously with the first appearance of Poirot there was an Hercules Popeau.
Meanwhile, back on those beautiful South Downs I'd been thinking about Indian soldiers recuperating in Brighton (or being cremated on the Downs) and then about The Sign of The Four. Three of the four were Indians, although Arthur Conan Doyle's grasp of Indian culture was rudimentary so their names suggested they had dual religions, both Sikh and Muslim.
In Conan Doyle's novel we never find out what happened to them.
I found out what happened to them writing The Belgian and The Beekeeper. It covers the Sikh Wars and the Indian Mutiny and the battle of Maiwand where Watson got that pesky Jezail bullet wound that moved around a lot in the course of Conan Doyle's short stories. There is Sherlock Holmes at the flickers and an unlikely partnership between two great detectives and much, much more.
I avoided copyright issues with a little sleight of hand. I put the novella up on Kindle with some other goodies as a Kindle Original. It's the first of three Holmes adventures I'm bringing out over the next twelve months. It was fun to write. I hope it's fun to read. Click here to buy.
Posted by Peter G. at 21:24

Email ThisBlogThis!Share to TwitterShare to FacebookShare to Pinterest
Labels: Hercule Poirot, Sherlock Holmes, The Sign of The Four

just finished reading it - it was great fun :)