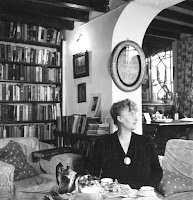 Camilla lives in The Hague in the Netherlands. Her debut novel, Pictures at an Exhibition, which revolves around the National Gallery during the Second World War, was published by Random House in 2012 and translated into Dutch, German and Polish. Camilla is currently working on a detective story set in the Netherlands in 1940. She has won a number of awards for her short stories and travel writing.

The competition celebrates the classic mystery story, and entries had to adhere to Allingham’s definition of a mystery. The great Golden Age author summed it up as: “The Mystery remains box-shaped, at once a prison and a refuge. Its four walls are, roughly, a Crime, a Mystery, an Enquiry and a Conclusion with an Element of Satisfaction in it.”

The Margery Allingham Society, set up to honour and promote the writings of the great Golden Age author whose most well-known hero is Albert Campion, works with the CWA to operate and fund the writing competition. One of the UK’s most prominent organisations for the support and promotion of crime writing, the CWA was founded in 1953. Each year the competition attracts many entries from the UK and overseas.

Dea Parkin, Secretary of the CWA, said: “We are in awe of the quality and number of entries we received this year. We’ve witnessed a huge resurrection in the popularity of mystery stories in the pandemic, thanks in part to the popularity of Richard Osman’s The Thursday Murder Club and authors like Elly Griffith's with The Postscript Murders and Robert Thorogood who created the popular BBC murder mystery series, Death in Paradise and wrote The Marlow Murder Club. This short story competition is a fantastic way of building a writer’s craft, and profile, in the mystery genre.”

Camilla will receive £500 and two passes for the international crime writing convention CrimeFest in 2022.

The announcement has come during National Crime Reading Month, an initiative promoted and supported by the CRA. Online events as well as blog posts and videos on the 2021 theme of emergence and escape are featured on the website www.ncrm.co.uk throughout June.