LONGLIST ANNOUNCED FOR THE McILVANNEY PRIZE 2021

sponsored by The Glencairn Glass

Winners to be presented on Friday 17 September 2021 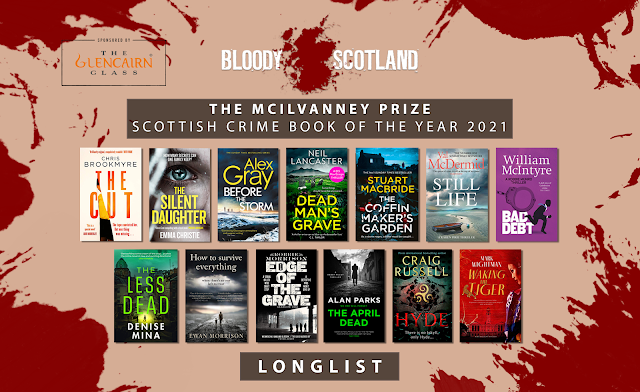 Five years ago the Scottish Crime Book of the Year Award was renamed the McIlvanney Prize in memory of William McIlvanney. This year his final book, The Dark Remains which was completed with the help of Ian Rankin will be published on 2 September coinciding with the announcement of the McIlvanney Prize shortlist.

The longlist for the McIlvanney Prize 2021 is today revealed to be:

Thirteen - a crime festival’s dozen! Only Val McDermid also featured on the list last year and Chris Brookmyre has featured on every longlist either as himself or his alter ego Ambrose Parry. He describes himself as ‘the Meryl Streep of the McIlvanney’. Craig Russell and Denise Mina are also previous winners.

'The McIlvanney Prize longlist once again reaffirms that our crime readers love great books by well-loved authors they are familiar with but are always on the lookout for new voices and new ways to tell a crime story. It's a testament to the breadth and depth of Scottish crime writing'

The McIlvanney Prize will be judged by Karen Robinson, formerly of The Times Crime Club and a CWA judge; Ayo Onatade, winner of the CWA Red Herring Award and freelance crime fiction critic and Ewan Wilson, crime fiction buyer from Waterstones Glasgow. For the second year running the sponsor will be The Glencairn Glass – the world’s favourite whisky glass.

The McIlvanney award recognises excellence in Scottish crime writing, includes a prize of £1000 and nationwide promotion in Waterstones. The 2021 longlist features established crime writers and debuts, corporates and indies. Previous winners are Francine Toon with Pine in 2020, Manda Scott with A Treachery of Spies in 2019 (who chose to share her prize with all the finalists), Liam McIlvanney with The Quaker in 2018, Denise Mina with The Long Drop 2017, Chris Brookmyre with Black Widow 2016, Craig Russell with The Ghosts of Altona in 2015, Peter May with Entry Island in 2014, Malcolm Mackay with How A Gunman Says Goodbye in 2013 and Charles Cumming with A Foreign Country in 2012.