The Rising Tide by Sam Lloyd 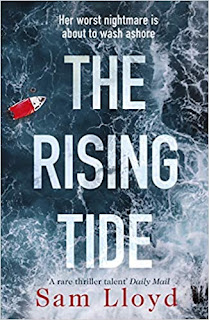 Lucy has, outwardly at least a perfect life with a husband, two children and a thriving arts business in a picturesque village on the Devon coast. Scratch the surface and there are problems, but these are as nothing compared to the troubles that are, literally, about to knock on her door.

In the space of a few hours the family yacht is found adrift and abandoned, her husband and children have disappeared, and an epic storm is disrupting attempts to find them. The world Lucy thought she had created for her family suddenly looks terrifyingly fragile.

Lloyd’s second novel, looks like a strong candidate to be one of the thrillers of the year. He shows a master’s touch for using the dramatic landscape of the Devonshire coastline to ramp up the tension and mirror the turmoil experienced by his characters. Unsurprisingly given the setting, one county along from her stamping ground, the ghost of Daphne Du Maurier hovers over the book making approving and even slightly jealous noises.

Lloyd has written a narrative that is often painfully dark and that refuses to shy away from the cruelty of which humans are capable, leavening the lump of this with an awareness of how tragedy can bring out resilience in those experiencing it. This is shown by a cast of characters who are defined by their flaws as well as the exceptional situation they find themselves in.

This is a darkly atmospheric and sometimes deeply unsettling thriller from a writer with a powerful gift for keeping his audience permanently on edge.