The Transparency of Time by Leonardo Padura (review)

The Transparency of Time by Leonardo Padura 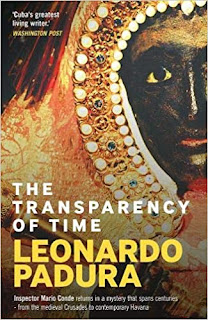 At first glance this is just another, the latest, in the Inspector Conde series.
You may remember moody, introspective Cuban cop Mario Conde from the ‘Havana’ series (Havana Gold, Blue, Black, Red and Havana Fever) but here he is involuntarily retired from the service, fat, unfit and sixty years of age (sixty going on seventy, I’d say) hired by an old school friend who has reinvented himself as a flamboyantly gay art dealer, sending Conde on what appears a Maltese Falcon mission to find an ancient artefact stolen from him by his young lover. The artefact, a black Madonna, is very old and, as becomes clear, very expensive. The unusual feature of this tale is that Conde’s trawl through Havana’s lowlife is interspersed with episodes from the past, each a century or two earlier than the last, and each apparently revealing the reason the Madonna is almost unique.
Some readers will find these episodes too long, too full of historical detail, and not directly linked to the tale in hand. Other readers will say that these historic, perhaps mythic, episodes are what raise this crime novel out of the mire of Cuban poverty into the richer light above. 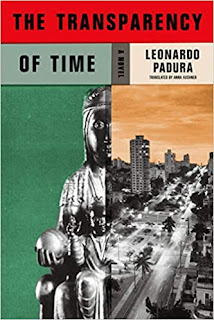 Leonardo Padura was born in Havana, Cuba, in 1955. A novelist, journalist, and critic, he is the author of several novels, two volumes of short stories, and several nonfiction collections. His novels featuring the detective Mario Conde have been translated into many languages and have won literary prizes around the world. The Man Who Loved Dogs was a finalist for the Book of the Year Award in Spain. Padura lives in Havana.

Anna Kushner was born in Philadelphia and first traveled to Cuba in 1999. She has translated the novels of Guillermo Rosales, Norberto Fuentes, Gonçalo M. Tavares, and Leonardo Padura.

Russell James is an established British writer and critic and was Chairman of the Crime Writers’ Association during 2001 - 2002.  Initially making his name as a crime writer, his hard-hitting, low-life thrillers were usually set in south east London and, unusually, they featured no detectives; when the police did appear it was on the sidelines. All his crime books were well reviewed and most are now available as ebooks.

But that’s not all.