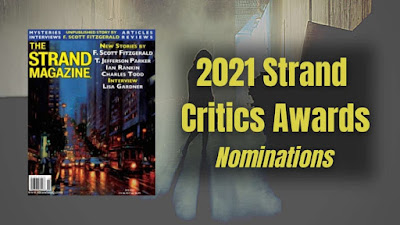 The Strand Magazine is pleased to announce the nominations for the 2021 Strand Critics Awards!

Recognizing excellence in the field of mystery fiction and publishing, the 2021 Strand Critics Awards are judged by a select group of book critics and journalists. This year’s judges include talent from NPR, USA Today, The LA Times, and The Wall Street Journal.

“This year’s panel chose a diverse set of authors,” said Andrew F. Gulli, managing editor of The Strand Magazine. “Many of these authors are new and exciting voices in our genre, and it’s wonderful to see them get the recognition they deserve.”

Trouble Is What I Do by Walter Mosley (Mulholland Books)

A Song for the Dark Times by Ian Rankin (Little, Brown and Company)

Confessions on the 7:45 by Lisa Unger (Park Row)

Leave the World Behind by Rumaan Alam (Ecco)

When No One Is Watching by Alyssa Cole (William Morrow)

A Burning by Megha Majumdar (Knopf)

A Certain Hunger by Chelsea G. Summers (The Unnamed Press)

Aptly dubbed the “King of Horror,” Stephen King is a true renaissance man of storytelling. Over the past 50 years, he has mastered and melded genres, from supernatural and crime to sci-fi and Western. King is also one of the most prolific authors of our time, with over 60 published novels and roughly 200 short stories. Yet with millions of books in print and a readership around the world, his writing remains as fresh and inventive as when Carrie (1974) first put him on the literary map.

“This is a beautiful thing,” King said of the award. “And I’m most appreciative. Looks like I’m in great company!”

When her first novel, With Shuddering Fall, published in 1964, 26-year-old Joyce Carol Oates was lauded as an exciting voice in fiction—and that has not changed. Consistently striking at the heart of the human experience, she has written over 70 novels, scores of short stories and poems, countless critical reviews, a heartbreaking memoir, and has edited several anthologies, plays, and essays. Oates has long been a force to be reckoned with, and an inspiration to aspiring writers everywhere.

“I’m honored to be a recipient of the Strand Lifetime Achievement Award with its distinguished history,” Oates said. “As a writer who spends much time in solitude, and especially during this perilous pandemic year when immersion in a world of fiction has been both a way of remaining sane and a way of trying to comprehend the insanity roiling about us, I am particularly grateful for the thoughtfulness and generosity of the critics who have thought of me in this regard. Thank you enormously! All writers need encouragement—and this is very encouraging.”

The release of The No. 1 Ladies’ Detective Agency in 2002 catapulted Alexander McCall Smith to the top of the bestseller lists. He’s continued the series of charming mysteries set in Botswana and has started several other highly successful series, including the 44 Scotland Street books, The Sunday Philosophy Club series, and numerous children’s books. A true humanitarian, McCall Smith has lent his support to several charitable causes, including rabies control and safeguards for the environment, as well as contributed to the Christian Book Sale, a charity that raises funds for disaster relief.

“I am immensely honored by this award from The Strand Magazine,” McCall Smith said. “This is a magazine with a great reputation and a great history, and it is such an honor to be associated with it in this way. I look forward to my continuing association with the splendid cultural institution that is The Strand Magazine.”

Publisher of the Year Award

Josh Stanton of Blackstone Publishing will receive the Publisher of the Year Award. Stanton took the helm at Blackstone ten years ago, and during his tenure sales have more than tripled. He has also overseen the evolution of Blackstone not only as one of the largest audiobook publishers in the United States, but also as a publisher of bestselling print and digital books, recently releasing highly successful mystery novels by Meg Gardiner, Brian Freeman, Catherine Ryan Howard, and Sara Foster.

“Josh and the team at Blackstone are simply phenomenal,” said Gulli. “Their recipe for success should serve as a guide to all businesses seeking to expand and forge excellent relationships with authors, vendors, publishers, and customers.”

“I would like to express my deepest gratitude to The Strand,” Stanton said. “It’s truly an honor to be chosen, and I’m humbled to receive this award. This recognition is a testament to our entire Blackstone team and all their amazing efforts and creativity. I’d like to thank the entire company because each one of you is as much a part of this accolade as I am.”

Past recipients of the Strand Publisher of the Year Award include Tom Doherty and Bronwen Hruska.

The Strand Critics Awards will be held virtually in early September.