One Half Truth by Eva Dolan (review)

ONE HALF TRUTH By Eva Dolan 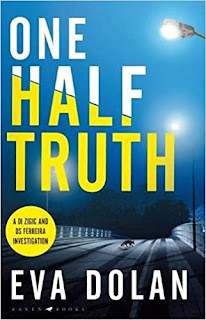 When detectives DI Dushan Zigic and DS Mel Ferreira are called to the report of a late-night shooting, they expect it to be drugs or gang related. They don’t expect to find a young student journalist murdered on his way home, for no apparent reason.

The case becomes more complex when it is discovered that those responsible for the death of Jordan Radley also broke into his house to take his laptop and notes of his latest case, which had to do with the closure of an engineering firm four years earlier, and the devastating impact it had on the community. A sad story, but surely not one worth murdering for. Zigic and Ferreira dig a bit deeper and begin to believe that Jordan was investigating something else, a bigger story that had the potential for a more explosive impact, but all evidence of what he was working on has vanished.

This the sixth book in the series featuring DI Zigic and DS Ferreira. There’s not much of an insight into these two main characters, and I imagine those who have followed the series from the beginning, and know the characters well, will get more out of the story. The writing is tight and flows into a satisfactory conclusion, although there are no real twists or explosive plot revelations. However, fans of police procedurals, even those who are not familiar with the earlier books in the series, will still enjoy this well-written and engaging novel.