The Colours of Death by Patricia Marques (review)

The Colours of Death by Patricia Marques 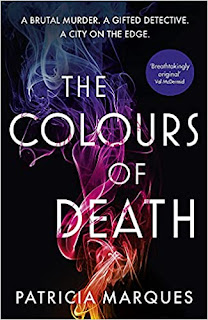 Lisbon’s morning rush hour is at its peak when a man is violently murdered in front of a packed train of horrified commuters.  But no one saw the murderer, only their victim being thrown through a window before falling, bloodied and broken to the floor.

Inspector Isabel Reis of the Police Judiciary is called to the Gare de Orient to survey the scene after shocked and terrified commuters, and potential witnesses, have fled.  It’s already being seen as a possible Gifted Homicide and she can already see evidence of it.  Once again, the gifted in Portuguese society are being targeted as dangerous and murderous.

Isabel is also Gifted and is required to have it stated on her PJ ID badge.  They are regarded with suspicion, contempt and hatred. An abomination is one way in which they are described and from the age of 5, when her talent was first discovered, Isabel has known that they are reviled.  Gifted people are either telepaths or telekinetic and Isabel is one of the former.

She also has a new partner, Inspector Aleksandr Voronov, who gave evidence against his former Gifted partner.  This makes her uneasy with him.  All Gifted people in the PJ are required to have a Regular, or non-Gifted, partner.  This is an alternative Lisbon where the Gifted live uneasily with the Regulars.  They are seen as people who can invade your mind and your privacy without you knowing and a right-wing political party, the PNP, makes great play on this.  The Gifted community are the elephant in the room that no one wants to acknowledge.

The murder victim is identified as Gil dos Santos, the head of Portugal’s National Testing Institute, where all Gifted people are identified and classified.  It’s where Isabel went to be tested when her talent was first beginning to manifest itself.

As the investigation gets underway, they begin by speaking to his second in command at the HTI, Celia Armindas and go through his Cloud files. He was scheduled to visit a comatose hospital patient who was once a Gifted Guide but why?  Gil was also undertaking research on trial drugs for the Gifted and there is a suggestion that the Government were interested in weaponising the Gifted.

But Isabel’s finding it hard.  She’s been taking powerful pills to suppress her telepathic talent but lately they haven’t been working as well.  As a result, she increases her dosage to up to 4 a day which gives her constant headaches.  When another high-profile murder takes place by an invisible assailant, Isabel and Aleks are under pressure to find the murderer fast. Isabel begins to meet other Gifted people who are living under the wire and who become part of the investigation.  Do they know more than they are admitting?  It isn’t long before she realises that the murderer may be one of the most deadly and powerful Gifted people ever known and that they’ve turned their attention to her – will she be next?

This is a very confident, original debut novel and I really enjoyed reading it.  The author created a completely believable and disturbing alternative reality.  Isabel was a powerful character who lived with her special talent as best she could and was becoming uncomfortably aware that the pills were no longer keeping it under control.  In fact, she may be more Gifted than she can imagine.  The author described the plight of the Gifted people so well as they are controlled more and more.

I also felt that this was a bold novel with its combination of genres and demonstrates how the crime and thriller genre can encompass many strands and ideas.  The Colours of Death was fast paced and had a very serpentine plot but it never lost sight of the person at its heart, Isabel, and her conflicted self.

The descriptions of Lisbon made me feel that I was actually walking its streets with Isabel and Aleks in the winter city as they search for a murderer.

This is one of the best debut novels that I’ve read this year and Patricia Marques is a writer to watch.   I’m already looking forward to reading more about Inspector Isabel Reis.