In The Spotlight: Jean Harker 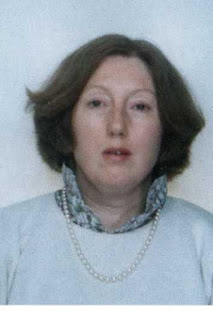 Jean Harker, is a Scot who was brought up in Wales and read English at Oxford (St Hilda's). She is a writer for television and radio. She has written short stories for Woman’s Weekly and Bella, and television scripts for Jackanory Playhouse. She is also the creator of the children's programme The Wild House.

Reading or working on? I’m mostly a scriptwriter (as Jean Buchanan) so what I’m working on at the moment is a series of 15-minute scripts for children about a trainee wizard (still at Wizardschool) who is almost completely lacking in magical talent and is still on grade 1. I regret to say that it is influenced by childhood memories of piano lessons – if you haven’t got it, you haven’t got it.

The Pack of Pieces by Anthony Armstrong (1897-1976). It was published in 1942 by Michael Joseph, and is a collection of Armstrong’s ‘fairy tales for adults’ which had previously appeared as Christmas treats in posh magazines such as the Illustrated London News. These hilarious stories have a wonderful pantomime vibe, and are actually suitable for all the family. At the time The Pack of Pieces was published, Armstrong was busy editing, and writing most of, Tee Emm, the RAF’s legendary WWII Training Memorandum and home of the celebrated twit Pilot Officer Prune (created by Armstrong and cartoonist Bill Hooper), whose disregard of safety details and correct procedures demonstrated what not to do.

This is a really good question, and crime fiction is the best place to look for inspiration. I should like to invite Michael Innes’s Sir John Appleby (as he became towards the end of his police career) and Lord Vetinari, the Patrician of Ankh-Morpork, from Terry Pratchett’s Discworld novels – I am sure that they would have an intriguing conversation about spycatching and the maintenance of public security. To another dinner, I would invite Inspector Morse and Commander Sam Vimes of the Ankh-Morpork City Watch, who later became Duke of Ankh, and I would listen to their discussions of criminal investigation. It is interesting to note that, of the four characters I have mentioned, only one was not ennobled – Morse.

By loading the dishwasher, making soup, and going for walks around Farmoor Reservoir.

Who’s Afraid of Beowulf? by Tom Holt. I suppose it comes under the heading of fantasy action adventure, as it’s about a group of 9th-century Viking warriors who wake in the present time from a magical sleep. Taking modern technology in their stride, they continue their campaign against their great enemy, the evil sorcerer-king. The plot contains history, archaeology, magic, romance, sword-fights, the Germanic heroic code, and some of the best dialogue I’ve ever read. I’d love to do a screen adaptation of it.

Ah, what a telling question... I should advise myself to network furiously, to learn to recognise an opportunity and grab it, and also to read books by or about writers who’ve made it, so as to learn from their career experiences. Among such books are David Mitchell’s memoir Back, Neil Gaiman’s Don’t Panic (about Douglas Adams and The Hitchhiker’s Guide to the Galaxy), and Richard Molesworth’s well-researched Robert Holmes: A Life in Words, about a peerless television scriptwriter who started out as a policeman.

What made you decide to want to tell the story behind the classic Alfred Hitchcock film To Catch a Thief?

I first went to the Côte d’Azur -- otherwise called the [French] Riviera, and the most glamorous part of the South of France -- about 20 years ago, and loved it. We had a copy of the Rough Guide to Provence with us, which mentioned Hitchcock’s 1955 film To Catch a Thief and said that the film’s three stars were the Riviera, Grace Kelly and Cary Grant, in that order. I realised that I had seen the film, but only in black and white years previously on my parents’ very old telly. So I bought the DVD and watched To Catch a Thief in colour. It was stunning. I was blown away, captivated by the scenery, the glamour, the fashions, the badinage, the storytelling...

I got hold of a copy of the 1952 novel by David Dodge, which was the book behind the film; the two are interestingly different. Then I read Dodge’s 1962 travel book The Rich Man’s Guide to the Riviera, which included an account of the events which inspired his best-seller To Catch a Thief. At the time, Dodge and his family were living in a small rented villa near Cannes, and – in his absence -- Dodge was suspected of carrying out a daring $250,0000 jewel-robbery in the palatial villa next door while celebrity guests were dining on the terrace overlooking the Med. Of course Dodge was innocent, and the thief was soon arrested. But Dodge had the plot for his next novel, which he claimed was ‘the easiest eighty-thousand words ever written’ -- expatriate American former cat-burglar is wrongly accused of committing a daring jewel-robbery and has to prove his innocence by catching the real thief.

Would it be possible to find the small villa which Dodge rented, I wondered? In The Rich Man’s Guide to the Riviera he described its location in a lush garden sloping towards the Mediterranean in the small port of Golfe-Juan, a few miles outside Cannes. The villa was called Noel Fleuri, because the garden was in bloom at Christmas. In an article in the travel magazine Holiday Dodge provided, just once, the name of the nearby palatial villa which had been burgled. Would that be enough to enable us to find the Villa Noel Fleuri? It was, and we did. Our search for the villa made it into a Radio 4 arts feature, a tie-in with my dramatisation of the novel To Catch a Thief for Radio 4. The Dodges’ little villa is still standing, although in a state of some disrepair, on some of the most expensive real estate in France.

My two favourite books featuring Oxford. First of all, the 1911 classic novel Zuleika Dobson by Max Beerbohm. It is usually described as satirical, but it is knowing and funny as well, and written with terrific style, about a bewitching girl who arrives in Oxford and wreaks havoc among the undergraduates (then only male) who all fall in love with her. Beerbohm left Oxford without a degree, having used his undergraduate years at Merton to establish himself as a journalist and caricaturist (‘I was a modest, good-humoured boy. It is Oxford that has made me insufferable.’). Then about 16 years later he put his thoughts about Oxford into Zuleika Dobson, his only novel. He was very keen for the heroine’s name to be pronounced properly, and when the BBC proposed a radio adaptation, he sent the producer a telegram which read ‘ZULEIKA SPEAKER NOT HIKER BEERBOHM’.

The novel Zuleika Dobson may be easily slipped into a pocket, but the same cannot be said of my second choice, which would seriously impede any tourist enthusiastic enough to want to carry it around when sightseeing. It is a real doorstopper of a book. An Inventory of the Historical Monuments in the City of Oxford (HMSO). It was originally published in 1939, and contains lots of architectural and historical details of the colleges and other university buildings, along with some useful photographs.