In The Spotlight - Philip Gooden 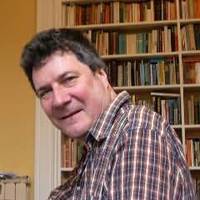 In addition to being the author of two historical crime novels (one under the name of Philipa Morgan) Philip Gooden is also the author of a number of books on language. His most recent book is Bad Words (2019)

Operation Fortitude by Joshua Levine. It’s background reading for my St Hilda’s talk on J.C.Masterman, who was an Oxford academic and author of detective stories. During World War Two John Masterman ran the Double XX Committee, which produced propaganda and misleading information, mostly by using Nazi agents in Britain who’d been turned. It’s an astonishing fact that from very early in the war there wasn’t a single German spy who hadn’t been captured or - more usefully - ‘persuaded’ into being a double agent.

Plenty of them. But Dickens’s Great Expectations, perhaps. The story of Pip from child to adult, learning often uncomfortable things about himself as he rises up through Victorian society. The point near the end when Pip finally acknowledges the debt he owes to the convict Magwitch is a real lump-in-the-throat moment.

Sticking with literary classics, how about Jane Austen‘s Emma? Lovable, infuriating, talkative. Pair her with Jack Reacher to see how long he could hold out and stay saying nothing.

The usual, walking, reading, seeing people (and having a drink).

John Fowles’s The Magus. It gets a bit pretentious and obscure towards the end but the journey there is wonderful: sea, sun and seduction on a Greek island, and everything controlled by a mysterious, sinister story-teller.

A piece of advice a friend gave me when I was dithering about writing something. ‘Well, if you don’t do it, no one else will.’ It’s true. Whatever you write, good, bad or indifferent, can only come from you. So, if you don’t do it...

How would you describe your series characters Nick Revill and Geoffrey Chaucer?

Nick is an enthusiastic young player who joins Shakespeare’s company at the Globe Theatre around the time they’re putting on Hamlet, a play about murder. And naturally Nick tumbles into one actual murder after another in Sleep of Death and the books that follow. Geoffrey Chaucer was real, of course, even if not that much is known about the life of the author of the Canterbury Tales. But he carried out diplomatic missions on behalf of Edward III in France and Italy and elsewhere, missions in which I get him mixed up with murder and mystery as well.

Information about 2021 St Hilda's College Crime Fiction Weekend and how to book tckets can be found here.