Why Make It Up? How I reached the 20th Bryant & May book by Christopher Fowler 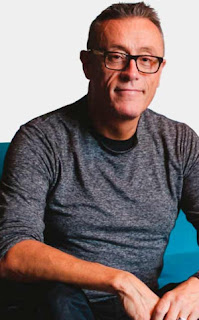 For my mother, a crime novel was a sealed room and some suspects. She didn’t appreciate that you could use them to smuggle in all kinds of strange and thoughtful notions. Bryant & May have been unraveling London’s mysteries (and in the process learning about themselves) for well over twenty years – and now they’ve reached their 20th anniversary book.

Long-running crime series are acknowledged but not always reviewed, and if they have elements of humour they’re rarely taken seriously by critics. You can write a story in which half a dozen victims die in the course of a single investigation and no-one will disbelieve you if you present the facts without laughing. The irony is that the Peculiar Crimes Unit is rooted in truth and the crimes are often versions of real events, exaggerated but never impossible. I don’t work in the field of magical realism; the books are full of personal stories I’ve jotted down.

In ‘London Bridge is Falling Down’ I wanted to create a grand adventure involving a landmark that exists in plain sight. In many ways London Bridge lies at the heart of the city, but it has now become invisible. It’s so little regarded that if you Google it you’ll be shown endless images of Tower Bridge. Having torn down so many of our most beautiful buildings we’re left with the ones which are useful, and London Bridge fits the bill. It’s not attractive but it is by far the most fascinating of the thirty five bridges.

Although each investigation features roughly the same cast, each book must stand by itself. A series is not a serial. Luckily I’ve had a lot of help from London, which works as an extra character and sets the tone for what follows. I’m not the only one to discover this; Ben Aaronovitch, Laura Wilson, Mick Herron and many others have also realised how inspiring the city can be to the criminally minded.

I wanted to start the book with the tragedy of an elderly lady who died of neglect in the centre of town, a story which was taken from today’s papers. I don’t like using women as victims, so the first thing I did was make her strong. But I also love hiding puzzles, so in a fair-play gesture I came up with a few tricks hidden in plain sight. I always make sure I have a powerful ending and work backwards; otherwise the reader won’t feel properly rewarded for the hours they’ve invested.

Ideas for novels come from multiple directions; ‘Oranges & Lemons’ started when I walked around London churches reading the dark history of nursery rhymes, realising there was a hidden connection between them. I added one of the few citrus-based accidents ever to feature in a mystery novel.

I also like to invent new words. There’s no law that says you can’t make up a word if you can’t find an appropriate one. As a result, Oxford English Dictionary readers are adding half a dozen of my invented words to the next edition of the OED as they meet the criteria for inclusion. I’m very proud of this!

Calling the Bryant and May books ‘unorthodox’ is a bit of an understatement. Their unlikeliest investigations are mined from London's forgotten stories; tales of lost paintings, fallen celebrities, tragic sacrifices, mysterious guilds, secret clubs and forgotten social panics. In one novel I staged a murderous attack on a tube escalator surrounded by CCTV cameras just to show it could be done. It’s better to confront the challenges of the 21st century head on. Necessity makes for originality. Who could have made up the fact that in 2019 a terrorist was beaten back with a narwhal tusk on London Bridge?

It’s said that readers enjoy mysteries because they tidy up the mess of real life, but I try to leave a few untidy ends for the reader to unravel. This time I’ve given them their fullest rein, from Rita the scarily well-read taxi driver to three elderly ladies who work for government security, all of whom are based on real characters. And I’ve broadened out the story, even managing to get my detectives to New York.

So, after twenty-plus years is the history of Bryant & May finally over? Not quite. Crime writers are tricksters. Wait and see, I may still have a surprise or two up my sleeve. 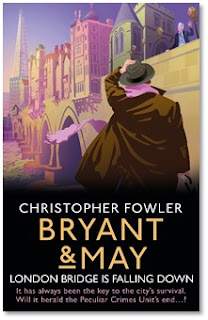 Bryant and May: London Bridge is Falling Down by Christopher Fowler (Doubleday) Out Now

It was the kind of story that barely made the news in London. When 91 year-old Alice Hoffman dies of neglect in her top floor flat on a busy London road, the story is upheld as an example of what has gone wrong with modern society; she slipped through the cracks in a failing system. But detectives Arthur Bryant and John May of the Peculiar Crimes Unit have their doubts. Mrs Hoffman was once a government security expert, even though no-one can quite remember her. When a link emerges between the old lady and a diplomat trying to flee the country, it seems that an impossible murder has been committed. Mrs Hoffman wasn't alone. Bryant is convinced that other forgotten women with hidden talents are also in danger. And they all own models of London Bridge... With the help of some of their more certifiable informants, the detectives follow the strangest of clues in an investigation that will lead them through forgotten alleyways to the city's oldest bridge in search of a desperate killer. Just when the case appears to be solved and exasperated unit chief Raymond Land can retire and rest easy, the detectives discover that Mrs Hoffman was smarter than anyone imagined. There's a bigger game afoot that has more terrible consequences... t's time to celebrate Bryant and May's twentieth anniversary as their most lunatic case brings death and rebirth to London's most peculiar crimes unit.