Writing in Ice: A Crime Writer’s Guide to Iceland by Michael Ridpath

Over the last twelve years I have written five crime novels set in Iceland. I have visited the country many times, I have spoken to dozens of Icelanders, taken loads of photographs and mumbled for hours into a tape recorder in the wind and rain.

I have taken notes.  Boy, have I taken notes.  I’m quite proud of the way I have organized them. I have a massive Word file of 450 pages (over 200,000) words, all split into sections and subsections for easy reference.  So, if I want to describe the café Mokka in Reykjavík, for example, or the effect of the sunlight and clouds on Mount Esja, I can look it up right away.

Of course, I only use a small fraction of all this work in each book. 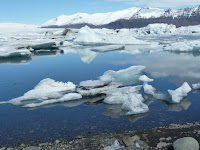 After I finished my last Magnus novel (Magnus is my detective) I looked at this research file and thought – how can I make this information more widely available?  There is plenty of good stuff in there for anyone interested in Iceland and for the tourist.
I love Iceland, but it is in many ways a profoundly strange place.  Here are a dozen odd facts from my files:
1.    The only country ever to invade Iceland was Britain in May 1940, on the same day Germany was invading Belgium.  The British went the wrong way.

2.    When an Icelander gets a piece of extraordinary luck he shouts “Hvalreki!”, which means “Beached whale!”

3.    Iceland has had three Miss Worlds, not bad for a country with the same population as Coventry, which has had none (yet).

4.    Iceland is the only country in medieval Europe to be governed without a ruler.  Between its settlement in 874 and 1264 Iceland was governed at an annual open-air meeting of the chieftains called the Althing, held on the floor of the rift valley at Thingvellir

7.    Until 1987 there was no television in Iceland on Thursday nights.  The TV guys needed a day off like everyone else.

9.    Iceland is teeming with “hidden people” who live in rocks.  Roads have been diverted to avoid these dwellings.  A higher proportion of supporters of the Progressive Party believe in hidden people than supporters of other political parties.  Everyone’s granny has spoken to one.

10.    Icelandic still uses two letters from old English, thorn (þ) and eth (đ).  These were introduced to Iceland by English monks in the eleventh century.

11.    89% of houses in Reykjavík are heated using steam bubbling up from the earth’s core.  The hot water in Reykjavík smells vaguely of sulphur.

12.    An Icelander was the first European to discover America (Leifur Eiríksson) 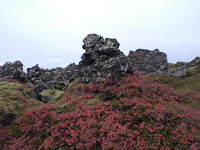 There are many, many more.

At heart, I’m not a non-fiction writer, I’m a storyteller.  So I decided to tell the story of how and why I set a detective series in Iceland.  The stakes, for me at least, were high.  After writing eight financial thrillers, I was looking for a new setting for my novels.  I knew nothing about Iceland, and I wasn’t entirely certain I would be able to discover enough about the country to write crime novels set there.  It was a risk.

In Writing in Ice, I describe all that I did discover: Iceland’s people, its culture, its breath taking landscape, its history, its literature, its myths and its music.  I also show how I put together a detective series in a foreign country: creating Magnus my detective, researching characters, how to describe a setting and an atmosphere.

When I wrote my first Magnus novel, Where the Shadows Lie, there was only one internationally known Icelandic crime writer – Arnaldur Indridason.  Now there are many more: Yrsa Sigurdardóttir, Lilja Sigurdardóttir (no relation), Ragnar Jónasson, Quentin Bates (who is British like me, but knows Iceland much better than I do) and more emerging every year.  Which isn’t surprising, really, since it’s brilliant place to write about.

By this point you may be asking yourself, what is the point of a foreigner writing about Iceland when there are so many Icelanders who do it so well?

There is an Icelandic expression: “Glöggt er gests augad”, which roughly translates to “Clear is a guest’s eye.”  There are some things a foreigner can see and describe, which a native won’t.  There is so much extraordinary in Iceland, that it all seems ordinary to an Icelander.  But I can point it out.

That’s why I made my detective, Magnus, an Icelandic-American.  He moved to Boston when he was twelve and became a Boston homicide detective.  So when he returns to Iceland, he sees his own country through the eyes of a guest.  Through my eyes.

Michael Ridpath is the author of the Magnus Iceland Mysteries.  His book Writing in Ice: A Crime Writer’s Guide to Iceland is published 1 July 2021. 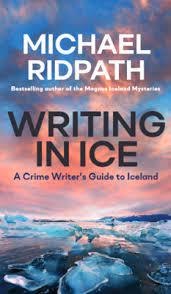 If you had to choose a new location for a crime series, where would you look? Michael Ridpath had to do just that. He chose Iceland, a country of fjords, glaciers and volcanoes, of long, manic summer days and long, sinister winter evenings, a place where everyone is on Facebook and everyone's grandmother has spoken to an elf. This is his account of researching the country: the breathtaking landscape, its vigorous if occasionally odd people, the great heroes and heroines of its sagas, and (of course) those troublesome elves; with a little bit thrown in about how to put together a good detective story.