Two or Three Things I Know About Her by Jérôme Leroy

Two or Three things I know about her is a film by Jean-Luc Godard, released in 1967. For those of you who haven’t seen it, this film tells about a young woman who is a mother and also an occasional prostitute.

She lives in one of those large suburban complexes around Paris, built in great numbers in the 1960s in France. This young woman is not really forced into prostitution because of poverty or that kind of thing. For her, it is just a way of spending time and meeting people in those places where people do not meet people anymore.

How can people react in a normal way when they are piled up one above the other in thousands? A British writer whom I admire a lot, JG Ballard tells about this phenomenon in one of his novels, Great Rise, published in the mid 70s. And there is no denying this phenomenon hit all of Europe. Capitalism arranged with authoritarianism all the aspects of daily life in order to increase workers’ cost-effectiveness while at the same time improving its means of control and surveillance.

In Two or three things I know about her, the ‘she’ both means the young woman but also the city and its spreading suburb. There is a sentence by Godard when he sums up his approach and which I particularly like ‘when the skirts of a city are lifted, the sex can be seen’.

That sentence also reflects perfectly, I think, the description of the work of the roman noir writer. The writer must be indecent: show what is hidden while everyone knows it is there.

Actually, who killed who? is not a question I am interested in. In Little Rebel, I lift up the city’s skirts and I show that in reality everyone kills everyone. This is the difference between what we call in France the detective novel on the one hand and the roman noir on the other. The detective novel acts as a sedative, a tranquilizer. At the end the reader is reassured. Everything goes back to normal. On the contrary, the roman noir shows that order doesn’t exist. Capitalism such as shown in Godard’s or Ballard’s work has led to a total, cruel and inhumane chaos which in a hypocritical way keeps the appearance of normality.

And yet the writer must make people laugh too.

In this regard, I have a master as far as the roman noir is concerned. His name is Jean-Patrick Manchette. I think his books are translated into English. He is the father of what we call in France the néo-polar, born after May 1968. But Manchette is above all a great writer because he understood that the néo-polar without humour becomes a boring, lesson–giver catechism.

In Little Rebel, I am not a lesson-giver. I just give a snapshot of France in the 2010s-2020s. a paranoid country afraid of everything and sometimes rightfully: indeed, terrorism kills but each time antiterrorist laws limit more and more people’s liberties. Education, something we have been proud of for a long time, is now a wreck, except for the rich (one might think it is Britain). And my book is a direct tribute to Manchette, up to his behaviourist style.

However, I remain an incurable romantic in so far as I think poetry can save the world. Poetry you read, poetry you write or try to write. For me Rimbaud is as important as Marx or Guy Debord. Rimbaud’s motto is ‘ Change life’. And it is becoming an emergency right now, isn’t it? If life doesn’t change between viruses and climate change, soon there will be no more life…

Well, life is beautiful, isn’t it? Real life, I mean. Life where everyone can go to the beach, dance, listen to the Rolling Stones singing ’Time is on my side’ and write poems instead of romans noirs. 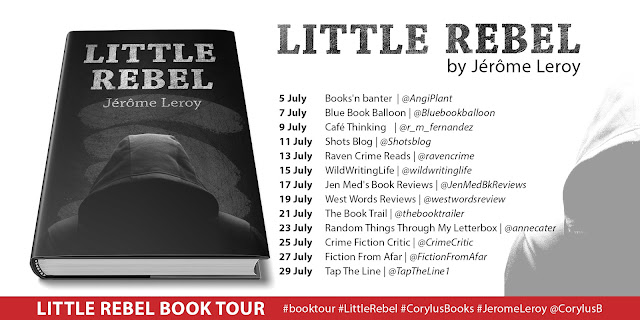 Divided along so many social fault lines, a city in the west of France is a tinderbox of anger and passion.As the tension grows, things go badly wrong as a cop is killed and a terror cell is scattered across the city. A school on the deprived side of the city is caught up in the turmoil as students, their teacher and a visiting children’s author are locked down.
Making his first appearance in an English translation, Jérôme Leroy gives us a subtle and sardonic perspective on the shifts taking place in politics and society in this disturbing novella.