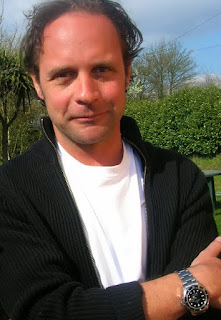 In 1990 I started working in Tiptree, a village between Colchester and Maldon in Essex. At the time I was living in Billericay, a commuter town twenty-five miles away to the west. The nearest big towns were Basildon and Chelmsford. Up until this point, I had always worked in London and while Tiptree was pleasant enough, it was a place noted for its superb jam, not its thrilling nightlife. I was twenty years old at the time and I found it hard to adjust to a slower pace of life. I’d never been to Colchester, let alone any of its outlying villages, and more often than not the local gossip and references were lost on me. One thing that came up time and again was the curious sounding, ‘Essex Triangle’, and the nearby small town of Coggeshall, in the heart of the triangle.

Legend had it that a disproportionate number of murders had been committed within this ‘triangle’, relative to the size of the population who lived there. The other thing I often heard about Coggeshall was that it was built on ley lines, and that all manner of weird happenings and hauntings occurred there. This all seemed suspicious and I paid no attention; I was not remotely interested in countryside myths.

Within two years I opted to return to London.

Decades later, when I started writing crime novels, these hazy memories returned to me. By then I had moved to that very part of Essex that I had not taken to as a younger man; moreover, I knew it well and I decided I wanted to write about this familiar and often underrated landscape. In Blackwater, the first book in my new series, I had established my lead character DS Lowry in Colchester. For the second book, Yellowhammer, I would take him into the countryside, to Coggeshall and Kelvedon.

Alas I never came across the infamous ley lines in Coggeshall, but shortly after Yellowhammer was published, I discovered a book called The Essex Triangle by Simon Thurlow, (with the subtitle Four decades of violence and mayhem in a sleepy pocket of rural England). On the cover is a photograph of the convicted murderer Jeremy Bamber, whose victims were discovered in 1985 at White House Farm in Tolleshunt D’Arcy, less than four miles from Tiptree. Inside the cover is a map of the ‘Essex Triangle’ itself: and, smack in the middle, is Coggeshall my current hometown. The triangle has become a circle; these myths and stories that were of so little interest to my 20-year-old self in the end became the very things that fuelled my imagination and inspire me to continue writing. 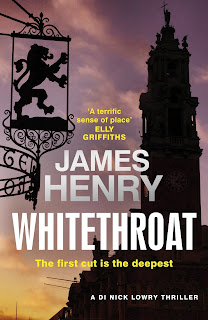 Whitethroat by James Henry is published by Riverrun on 8th July, £14.99

It's November 1983 in Essex and there are reasons to be cheerful. Uptown Girl is sitting pretty at the top of the charts, Risky Business is raking it in at the box office, and there are now four channels on the telly. However, social tensions are beginning to bubble beneath the surface: Mrs Thatcher has embarked on her second controversial term, and the situation in Northern Ireland is ever-escalating.
Yet in the garrison town of Colchester, it's another deadly standoff that is hogging the headlines. The body of a nineteen-year-old Lance Corporal has been discovered on the local High Street, the result of what appears to be a bizarre, chivalrous duel. It seems he was the victim of a doomed army love triangle. As such, the military police are wishing to keep the matter confined within military ranks.
This is all just fine, as far as Colchester CID is concerned. They have enough on their plate as is: with DI Nick Lowry in a tailspin following the breakdown of his marriage, WPC Jane Gabriel exasperated by the male-favoured system, Detective Daniel Kenton relying on substance abuse to quieten his demons from his last case; and their boss, DCS Sparks, shortly to become a first-time father at 55.
However, it is not long before the blood from the duel runs into civilian police affairs, and the trail presents CID with a local rogues' gallery. A savvy entrepreneur. A wayward skinhead. A member of the landed gentry. And a shadowy Mauritian travel agent with a chilling reputation. Soon, they will discover, a real estate deal, a racist, and the town's Robin Hood pub hold the key to the killing...